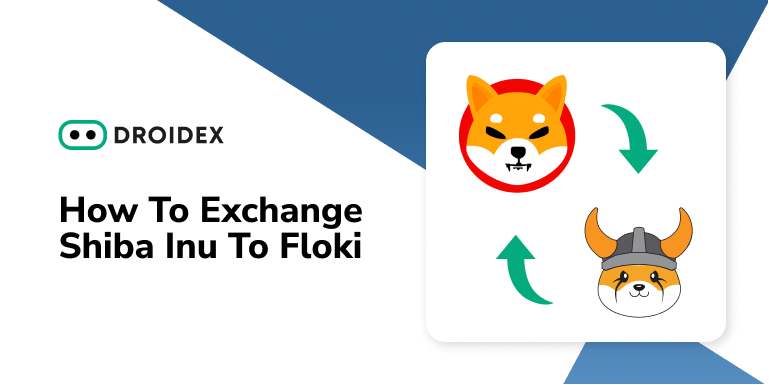 Floki Inu (FLOKI) is a spinoff of the well-known Shiba Inu (SHIB), which has captured a market capitalization of over $10 billion. It’s based on Elon Musk’s tweet, in which he said his Shiba Inu (dog breed) would be named “Floki”. Such a thing led to a real buzz on the crypto market, as well as to a Floki Inu coin creation.

People who are willing to exchange Shiba Inu for Floki will find this article helpful – today, we’re going to tell you what Shiba Inu and Floki are, whether there are any differences between the cryptocurrencies, and how it’s possible to swap SHIB for FLOKI using a smart Droidex aggregator. So read carefully, and let’s get to the point!

What is Shiba Inu?

First of all, let’s start with the basics and take a look at what Shiba Inu and Floki Inu are.

Shiba Inu is the Ethereum-based decentralized cryptocurrency that was founded in 2020 by “Ryoshi” – an anonymous person or group of people. The coin was named after the Shiba Inu, a Japanese breed of dog originating in the Chūbu region. It’s actually the same breed that is depicted in Dogecoin’s symbol, which was originally a satirical cryptocurrency based on the Doge meme. Shiba Inu is also characterized as a “meme coin” and a pump and dump scheme.

Floki Inu, in turn, is a meme coin based on the Ethereum blockchain (later also on Binance Smart Chain). One day, Elon Musk tweeted that he named his dog (Shiba Inu) Floki – that’s how the cryptocurrency appeared. As always, Musk’s tweet led to excitement in the crypto market, as well as the creation of a new token. The original smart contract had some problems with tokenomics – rapid supply growth, meaning marked inflation, and large fees in favor of the developer as well. As a result, the first developer was ousted, and a new team is now handling the project, launching Floki V2.

Before moving to the key part of our guide, a swap process, let’s have a look at the comparison table of SHIB and FLOKI:

So how to buy Floki using Shiba Inu?

Want to make a Floki swap using Shiba Inu? If so, we’ve got some great news for you – the transaction can be easily completed successfully through a smart Droidex aggregator. This service offers its users the best rates among the major decentralized exchanges with top trading efficiency, as well as high transaction speed and secure process. Below you’ll find a small step-by-step instruction that will help you avoid all the possible difficulties.

We sincerely hope our small guide helped you to get a full understanding of how and where it’s better to swap Shiba Inu to Floki. Just keep in mind one crucial thing: investing in and trading any cryptocurrency requires substantial research and time, and, actually, SHIB and FLOKI aren’t the exceptions. So exchange and choose the platform wisely, and each of your transactions will be definitely completed successfully. Thank you for reading!