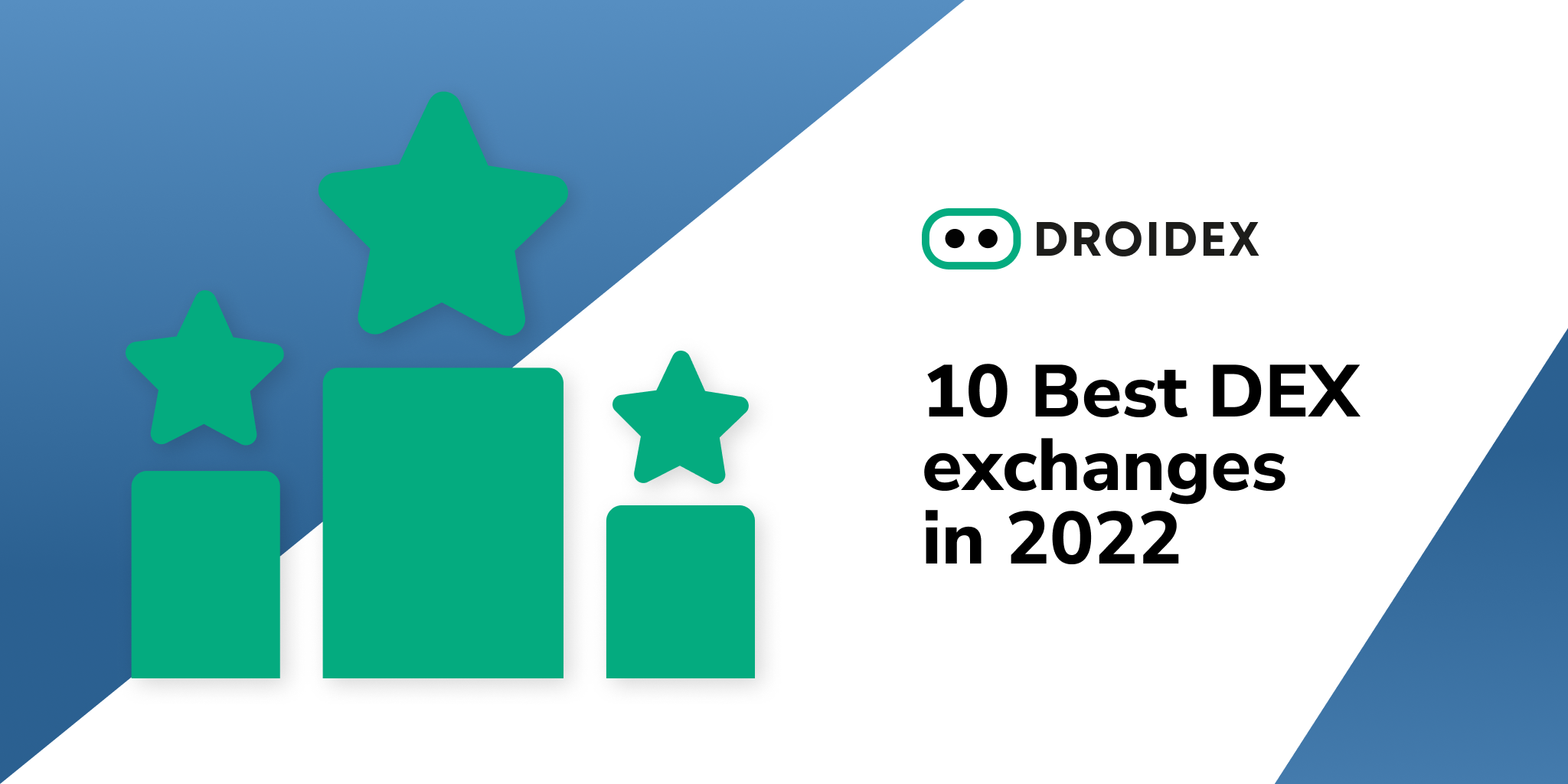 It’s not a secret for everyone that each newbie who has just dived into the crypto sphere is wondering to know some life hacks, which can help during any process. For example, you might be interested in learning what are the best tokens to invest in, where’s it better to do that, what’s the appropriate amount, in this case, and actually, swapping tokens isn’t an exception.

What are the best decentralized exchanges right now? Which one is better to choose? If you’d like to get the answers to all of those questions, you’ve come to the right place – today’s article will tell you about the top 10 DEXs in 2022, as well as about the features and advantages of each one. So let’s not waste time and take a closer look at our list!

The first place on this list undoubtedly takes Uniswap – the first DEX exchange, which reached such a level of popularity and trading volume that it can compete even with some major centralized exchange platforms.

The main advantage of Uniswap is the following: it allows users to take on the role of liquidity providers, contributing their assets to decentralized liquidity pools. Thus, liquidity providers share a part of the fees their pool generates, excluding a passive income.

Since Uniswap was launched (November 2018), it has gone through multiple upgrades – the last version of the platform, the third one, is already running, providing users with improved capital efficiency, better oracles, and many fee tiers.

Uniswap has collected the trading volume in the amount of more than $800 billion, as well as hosted one of the most lucrative airdrops ever, awarding early users with an expressing 400 UNI tokens worth more than $16,000 at their peak.

Even though the name of the second Binance decentralized exchange DEX sounds a bit funny, it’s considered one of the best platforms currently, as well as the most popular swapping one on Binance Smart Chain – regularly, it’s registering a daily trading volume in the amount of more than $300 million.

PancakeSwap supports around thousands of BEP-20 tokens and has its own token as well – it’s called CAKE.

As for the functionality, you’ll see many different functions available, including the following ones:

It doesn’t matter whether you like sushi or not – the SushiSwap DEX crypto exchange will definitely attract you. It’s a modified fork of the well-known Uniswap protocol that allows users to swap the assets across several different blockchains and layer-2 platforms.

What’s special about SushiSwap, you may ask? Let’s take a closer look at this question.

This platform is one of the first DEXs for the Avalanche, Fantom, Harmony, and Celo blockchains, and it has worked up the reputation among the first ones that were deployed on new chains.

In addition, SushiSwap allows traders to contribute liquidity to the platform to receive fees. If we speak about the key features, below you’ll see the most crucial ones:

Just like the majority of DEXs, SushiSwap has its own token as well – SUSHI. Using this utility token, you’re able to stake it and earn a part of the platform’s trading fees, as well as participate in its governance.

The fourth place takes the next popular DEX – 1inch. Its important features are the following:

Thanks to the governance token launched in December 2020, 1inch is expecting to create waves as a part of the DeFi ecosystem.

Droidex is an aggregator, which takes an honorable place in today’s list. It offers its users the best rates among the most popular decentralized exchanges with top trading efficiency. Below you’ll see Droidex’s main benefits you should know before using the aggregator:

If you’re going to swap tokens with the Droidex aggregator, we’d like to share with you a small step-by-step guide below that will help you avoid any mistakes and get things right on the first try:

Even though Halloween ended a long ago, SpookySwap decentralized crypto exchange is still with us, being one of the most popular nowadays. Probably, it’s one of the well-known DEXs on the Fantom Opera blockchain, as well as an essential tool in any Fantom trader’s toolbox.

The main feature of SpookySwap is that it offers both standard swaps and limit orders, allowing people to either source liquidity instantly, or place their best bid and wait for their order to be filled. Besides, it’s officially approved by the Fantom Foundation.

According to the statistics, SpookySwap shows an impressive $300 million in daily trading volume on a regular basis. Currently, it has about $1.5 billion worth of assets locked in its pools.

Apart from its powerful trading functionality, SpookySwap also provides its users with yield farms, generative NFTs that are called Magicats, and its own governance token – BOO. No, we didn’t want to scare you, it’s just the name.

The name of the next DEX speaks for itself – QuickSwap is a pretty popular, incredibly fast decentralized cryptocurrency exchange developed for Polygon-based assets. It allows users to swap ERC-20 assets over Polygon’s high-speed layer-2 blockchain with minimal delays and gas fees. Thanks to the speed of the Polygon blockchain, QuickSwap can provide an exchange almost instantly – everything you need to do is to use a bridge to migrate their assets to Polygon.

Nowadays, QuickSwap has nearly $700 million in locked liquidity, and typically amounts to $50 million to $100 million in daily trading volume, allowing liquidity providers to receive more than $100,000 each day.

As for the key features, the platform includes the following ones:

If you’re a Solana fan, this option will be perfect for you. The eight DEX on our list is the Raydium – automated market maker and DEX order book for the Solana ecosystem.

The platform aggregates liquidity from both users’ own liquidity pools and partner platform Serum’s order books, helping users always get the best price for their assets.

Raydium has increased its impressive trading volume by $42 billion since launching almost exactly a year ago and is arguably one of the most promising projects based on Solan.

In addition to its popular DEX solution, Raydium also has its own launchpad for the project, aptly named “AccelerateRaytor,” which helped crowdfund some of Solana’s most sought-after projects, including Star Atlas and Genopets.

The platform also offers frequent NFT drops through the DropZone feature and hosts a wide range of Raydium and Fusion yield farms that help users earn rewards for hosting their Raydium LP tokens.

TraderJoe is billed as a “one-stop-shop” for decentralized trading on Avalanche. The platform offers a wide range of different tools, including a powerful swap platform, yield farms, a launchpad, and a DeFi lending feature.

To make trading on Avalanche as simple as possible, TraderJoe has an incredibly easy-to-use and intuitive user interface, as well as minimalistic warrant controls.

The platform currently supports more than 100 different avalanche-based assets and regularly gains more than $100 million in daily trading volume. TraderJoe is arguably one of the fastest iterative decentralized exchanges operating today and is run by the $JOE token-holding community.

TraderJoe is considered a rare and unusual platform because of the following: it includes a useful Zap feature, which allows users to convert a single token into liquidity provider tokens without all the usual hassle of manually trading it for multiple tokens and adding liquidity.

AstroSwap was recently launched by DEX for the Velas blockchain.

For those unfamiliar, Velas is a Solana fork that uses a technology known as “artificial intuition” to boost speed and efficiency.

As one of the first DEXs on Velas, AstroSwap forms the main building block for DeFi on the platform and is currently one of the few places where users can stake, trade, and process cross-chain assets using MetaMask.

The platform works hand-in-hand with a cross-chain bridge known as Swapz to help users easily move their assets to and from the Velas network from a host of other blockchains to take advantage of its low fees.

AstroSwap is unusual among decentralized exchanges as it operates on Velas. It’s primarily designed for Cardano users who can use the Swapz bridge to trade their Cardano assets on AstroSwap without needing to wait in line.

The platform offers generous incentives and is very similar to PancakeSwap in its user experience, making it very easy for most traders.

10 decentralized exchanges are a sufficient number to get you started. Even though we’ve collected the best DEXs at the present time, there are many more new ones that may seem to you much more advanced. The key point you should always keep in mind is that it’s better to make sure in advance your decentralized exchange allows you to make any operation securely, and the rest is up to you. So choose wisely and good luck!