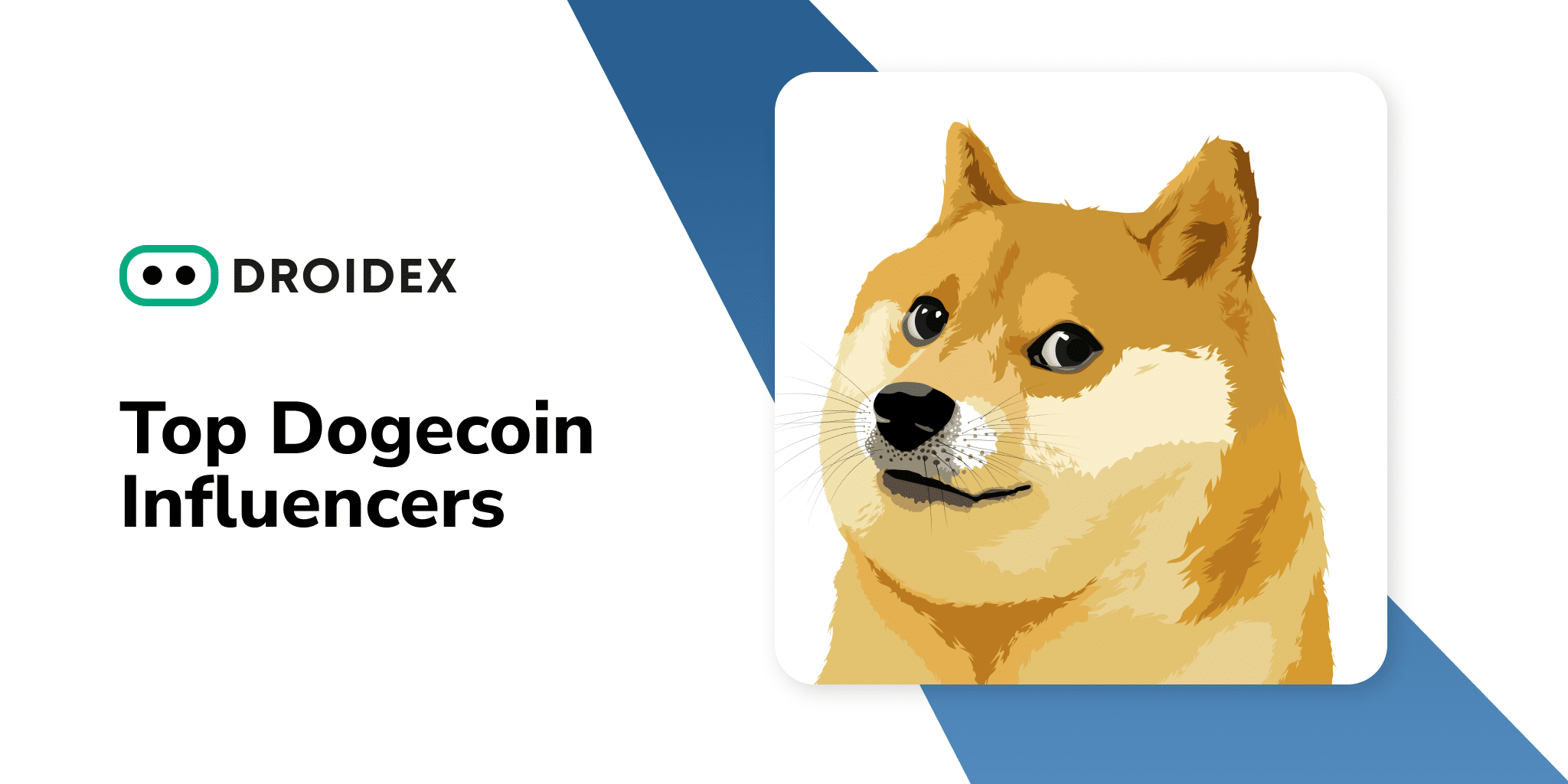 We’re sure you’ve heard about Dogecoin – a сryptocurrency that became the first memecoin in the world. However, even though it started as a joke, nowadays, DOGE is considered one of the decent crypto coins with its own wonderful community.

Elon Musk is the biggest Dogecoin influencer, but what about other lesser-known contributors to the coin’s family? Why do influencers actually matter? The answers to those and not only questions can be found in our guide – today, we’re going to tell you all the essential info connected with DOGE. So read carefully, and let’s get to the point!

Let’s start with the basics – what is DOGE?

Dogecoin is a peer-to-peer, open-source cryptocurrency. As we’ve noted above, its symbol is the famous Internet meme with the image of a dog breed Shiba Inu.

This cryptocurrency was created on the basis of the other project – Luckycoin, which was made from Litecoin. Litecoin, in turn, is a fork of Bitcoin. The main differences between Luckycoin and Litecoin/Bitcoin were faster transactions and a vast number of coins.

Dogecoin was created by two programmers – Billy Markus and Jackson Palmer. The blockchain was launched on December 6th, 2013, and the creators themselves called it a joke.

Later, in 2015, Billy Markus sold all of his DOGE – he wrote about it in an open letter to the community on Reddit.com. This platform had a major impact on the project’s development – even today Reddit’s branch dedicated to Dogecoin is quite popular.

Why do influencers matter?

The answer to this question is pretty simple – if you’re willing to be a successful trader in the crypto industry, you should keep abreast of all the latest news and developments. Fortunately, crypto fans are quite generous with their knowledge and speak out about the most essential things often.

It’s always a great idea to read about someone’s experience, their own reviews, etc., and have an idea of what to expect before buying or starting something new. Similarly, before you start trading or diving into the crypto world in general, it’s beneficial to learn experts’ opinions and recommendations – right here influencers provide us with assistance.

As we’ve already mentioned, although Dogecoin initially started as a joke, it quickly gained popularity, as well as a very strong community, which is now one of Dogecoin’s greatest assets.

Members of the community, also called Shibes, have been known for various charitable donations and other altruistic causes.

The community enjoys substantial support on social media. For example, Reddit’s DOGE group has 129,000 subscribers or Shibes, and they use Dogecoin to tip each other when posting nice content.

Besides, such charities as DogePizza and SocksForTheHomeless use Reddit as a platform to raise money for good causes.

The Dogecoin community, in addition to being one of its strongest assets, has been key to its survival and success so far – no other memecoin has enjoyed as much success as Dogecoin.

The common phrase used by Shibes, “1 Dogecoin = 1 Dogecoin,” means that they believe the coin should be used as a transaction currency, not solely as an investment or speculative asset.

The community is actively involved in Dogecoin, even creating new applications such as DogePal – a system that allows people to pay each other with DOGE, using email addresses.

Elon Musk, the richest man on the planet, although hasn’t created DOGE himself, became one of its iconic figures. You probably remember that once he tweeted about the coin for the first time, the price of Dogecoin more than doubled.

The first post Elon made was on February 6th, 2021. It contained the following question: “The future currency of Earth”, and there were two options for the answer:

This tweet disrupted the markets, and the value of Dogecoin instantly rose. However, Elon didn’t stop there and published several more posts.

Later, the billionaire wrote he has purchased the coins for his son and he has now become a holder as well.

Finally, a couple of words about the top 5 Dogecoin influencers – below you’ll see people whose opinion is definitely worth being heard:

Even though Doge Norway doesn’t have a huge number of followers, especially if we compare it with others, it’s still one of the greatest DOGE influencers nowadays. You can find this account beneficial and attractive thanks to its positive way to provide the necessary information, funny memes about Dogecoin, and words of support for the coin’s community.

Sir Doge of the Coin is another Dogecoin influencer that boasts almost 25K followers, as well as is a great source of information about the DOGE community. This account often reposts the latest news connected with the coin and also shares memes. Here’s an exciting fact: recently, Elon Musk himself even liked Sir Doge of the Coin’s tweet! So be the next who’ll do the same.

Everything you should know about the LilHumansBigImpact is that they’re focused on the Dogecoin community and use the influence to tell about different critical things. Don’t forget to follow the account!

DogeOuterLimits is a perfect source for daily DOGE news. Its number of followers comes to 30k, and the account itself is full of funny memes. This influencer follows all the updates in the Dogecoin community, so if you want to keep abreast with the latest developments, we recommend you to opt precisely for DogeOuterLimits.

The last influencer on our list, but not least interesting is SlumDOGE Millionaire – an account with impressive 215K followers. You’ll be surprised but they have their own merch, related to DOGE! SlumDOGE Millionaire posts lots of news about different currencies, including Dogecoin, Floki Inu, Cardano, and others, so it’ll definitely become your great source of various info every day!

How to swap Dogecoin using Droidex

Planning to exchange Dogecoin? If so, we’d like to share with you a small step-by-step guide on how to swap DOGE using Droidex. Droidex is a smart DEX aggregator that offers its users the best rates across the major decentralized exchanges with top trading efficiency. Just follow all the instructions accurately, and any of your transactions will be definitely completed successfully.

2. Once you’ve done it, choose Binance Smart Chain, if you want to swap DOGE.

3. Then, select coins – for instance, DOGE and BELT.

5. Next, connect the wallet – for example, MetaMask.

8. Congratulations! Get your coins!

Now, you know everything you need about the Dogecoin and its community: what actually DOGE is, why it’s worth listening to the views of the influencers, who are the most reliable Dogecoin experts, how the cryptocurrency became popular so fast, how you can make a DOGE swap, etc. Just bear in mind one key rule: it’s a pretty good idea to learn all the important info and read as many reviews as possible before starting purchasing, trading, and so on. So, if you’re not sure about something connected with Dogecoin, come back to our guide and brush up on all the significant things. Thank you for reading, and invest wisely!